What Is Art? A Stimulating Discussion Inspired by Stable Diffusion 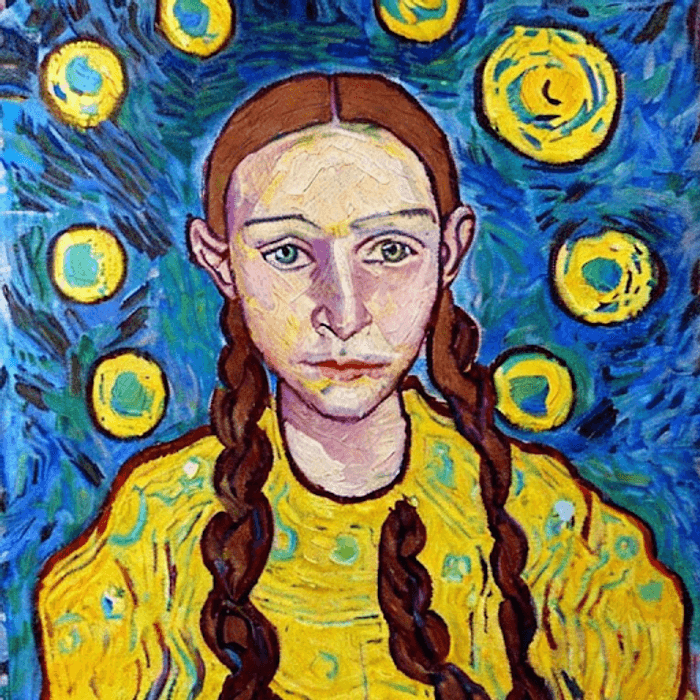 Prompt: “painting of a girl in the style of van gogh”

Perhaps you’ve tried to use Stable Diffusion to create a masterpiece of your own. Or maybe you’ve heard of or experimented with “Riffusion,” a version of Stable Diffusion that, instead of generating images based on text prompts, generates audio spectrograms. When the spectrograms are converted to sound, it results in music. These capabilities post the question: Is AI-generated art really art?

Grappling With the Definition of Art

I am reminded of a discussion with my colleague Nicholas Tollervey: We were at PyCon Ghana, and when a keynote showcased an image generated by the prompt “a hippo playing tuba on the moon,” we were fascinated and wondered if AI could replace the human generation of art. We had differing perspectives, and I found myself ruminating on the following question: Isn’t training a model to generate art comparable to a human artist generating art after being inspired by other works?

Perhaps you may argue that AI-generated art is devoid of human emotion, something that’s core to our appreciation of art. But I would counter that the emotion we experience in reaction to a work of art may be different from what the artist originally intended for us to feel—and that’s OK. We layer our own experiences and feelings over the art as we observe it, and it’s not always necessary to understand the artist’s intentions to appreciate it. So is the human-generated element really relevant to whether a work can be considered art or not? And if an AI-generated work cannot be called art, can we call a painting created by, say, a chimpanzee art?

Nicholas and I did not arrive at a neat and tidy conclusion, and frankly I remain a little unsure of what can or cannot be called art. “What is art?” is a question that has sparked debate since before we even had computers. Of course this is a particularly fascinating question now, as AI has entered the mix; over time, AI will surely generate artistic outputs that are increasingly indistinguishable from human-generated art. So do we add “human-generated” as a new criterion under the definition of art? If we do, how do we classify technology-assisted works, i.e. photographs that have been digitally retouched? I’m sure we will continue to grapple with these questions as technology advances, and we’re already seeing them play out on a practical level; there’s even pressure on some digital art competitions to institute rules disallowing AI-generated art from being entered, for example.

So what do you think? Share your perspective on what constitutes art in this Anaconda Nucleus forum.