A Faster Solver for Conda: Libmamba

By The Conda Team

conda 22.11 update: The libmamba solver's experimental flag has been removed. To use the new solver, update conda in your base environment:

To install and set the new solver, run the following commands:

The conda team is pleased to announce the availability of 'libmamba' as a new, much faster dependency solver for conda! Three different companies worked to make this release possible: QuantStack, developing mamba and libmamba; Quansight, integrating libmamba into conda; and Anaconda, developing conda and managing the overall effort. Read on to get to know the core contributors of this project, why we brought mamba's capabilities into conda, and how you can start speeding up your workflows today.

Why Did We Bring the Mamba Solver to Conda?

The mamba project is a fast, alternative conda client that has seen widespread adoption because of its implementation of the libsolv solver for conda metadata. In bringing the mamba solver to conda, this project had the following goals:

*based on the integration test suite performed on Linux, MacOS, and Windows

While mamba is advertised as a faster drop-in solver for conda, there were some differences in functionality, especially in edge cases that conda had accrued over the years. Some issues that arose in integration testing include pip interoperability, compatibility with conda’s package and platform test suite, and flag and update configuration resolution. That’s why Anaconda, in collaboration with Quansight, worked to integrate mamba’s libsolv repository parser and solver into conda, while re-using as much from conda as possible to bridge any functional differences that were observed in using the mamba solver.

With backwards compatibility as a priority, the goal of this libmamba integrations release is to significantly decrease time to resolve conda packages without changing existing conda workflows.

This experimental release of libmamba is our proof of concept for implementing a new solver. To use libmamba, install it in your conda base environment and then specify it as the solver when installing other packages:

To experiment using libmamba on an ad-hoc basis or without setting it as your default solver, you may run the following on the command line:

As an experimental release, anonymized automatic debug logging (stored as local log files on your computer) has been implemented to address any issues that may arise using the regular issue management system. The current release will be adopted as the default conda solver once we are happy with the stability and feedback received by the community, so adoption is highly encouraged and necessary for continual improvements! Any feedback that is provided will greatly expedite the adoption of libmamba as conda’s default solver. You may submit any issues at this Github link.

Please take the steps detailed above to activate the libmamba solver and experiment with your existing workflows. The Anaconda and Quansight teams will be closely monitoring these reports to continue to improve functionality of the solver.

Quansight and Anaconda are hosting a three-part webinar series covering the conda solver logic, integration and testing process, material changes that conda users will experience, and how to enable libmamba. Click this link to watch the debut webinar on Anaconda Nucleus or register to join Quansight and Anaconda in the next webinar, live on March 23rd at 2PM ET/11 AM PT. 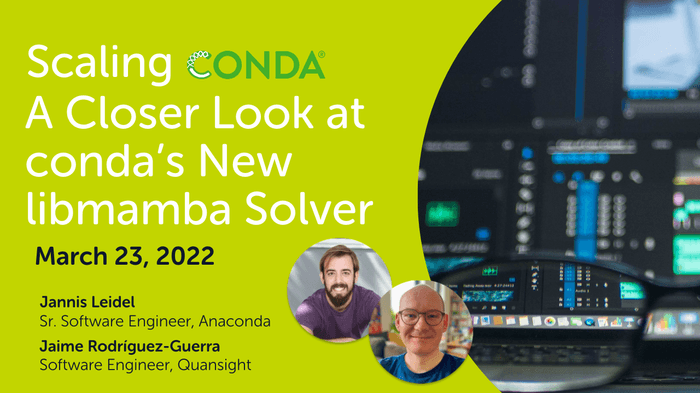